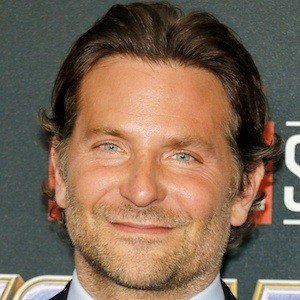 Bradley Cooper is best known as a Movie Actor. Actor who was nominated for an Academy Awards for his roles in Silver Linings Playbook, American Sniper, American Hustle and A Star is Born. He also starred in The Place Beyond the Pines, The Hangover trilogy, and provided the voice for Rocket in the Guardians of the Galaxy films. Bradley Cooper was born on January 5, 1975 in Philadelphia, PA.

He was married to Jennifer Esposito from 2006-2007. He dated his The Words co-star Zoe Saldana from 2011 to 2012. He also dated Suki Waterhouse from 2013 to 2015. He then began dating model Irina Shayk and, in April 2017, he and Shayk welcomed a daughter named Lea together. In 2019, he and Shayk separated. He received an honors degree in English from Georgetown University. He made his television debut with a part in Sex and the City in 1999.