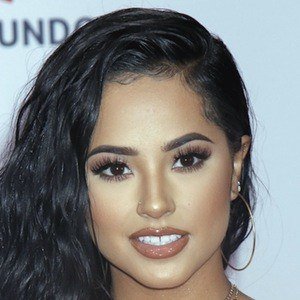 Becky G is best known as a Pop Singer. Mexican-American singer, rapper and actress who initially rose to fame in 2014 with her hit song “Shower.” She’d go on to reach superstardom in the Spanish-speaking market with her hit Mayores featuring Bad Bunny and her 2018 chart-topper Sin Pijama with Natti Natasha. She landed a starring role as Trini in 2017’s Power Rangers. Becky G was born on March 2, 1997 in Inglewood, CA.

Both sets of her grandparents are originally from Jalisco, México. She was born Rebbeca Marie Gomez and she has two brothers, Frankie and Alex, and a sister, Stephanie. Her parents’ names are Alejandra and Francisco Gomez. In 2015, she dated singer Austin Mahone. She then began dating soccer player Sebastian lletget in 2016. She started experimenting with rap music at the age of 12 and was discovered after uploading YouTube videos in 2011. She released her debut single, “Becky from the Block,” in 2013 and the music video for the song featured Jennifer Lopez.